DUBAI, UAE, Sept. 17, 2020 /PRNewswire/ — The past decade has seen many sectors evolve and develop substantially but digital entertainment has witnessed an unmatched progression. This growth can be attributed not only to content consumption but also to gaming that has played a key role. Owing to the significant improvements in mobile technology, the world has moved from the legendary snake game to an endless variety of much more advanced mobile games. Many mobile gaming applications have been developed over the years, but few have been able to feed the perpetually evolving consumer demand. It is due to this diverse demand that platforms like SHAREit have found great success as they offer a wide catalogue of games and a variety of other features as well. 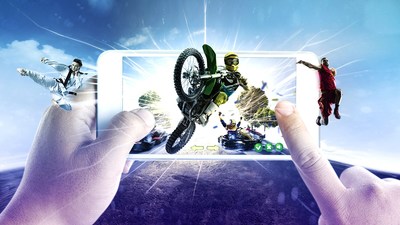 The global video game market is forecasted to be worth $159 billion in 2020, around four times box office revenues ($43 billion in 2019) and almost three times music industry revenues ($57 billion in 2019). This is largely owing to the fact that amid these testing times when people are at home and practicing social distancing, gaming offers an amazing distraction for them. Considering the improved availability and reach of smartphones and easier internet access, it does not come as a surprise that mobile gaming makes up for close to half (48%) of the industry’s revenue. This poses as a huge opportunity for application developers. ESports, which is known for organized, multiplayer video game competitions has also seen a major success and is poised to see growth of $1 billion in 2020.

SHAREit is the world’s leading offline and online app which provide several varieties of entertainment including online streaming video, file transfer, and games. It has over 1.8 billion users globally with 72 million MAU in the Middle East. SHAREit has a separate gaming center on the application which offers HTML5 games, gaming videos and an option to download hot games. It is one of the largest catalogues of mobile games, from developers across the globe. SHAREit could also help game developers and publishers to scale up their app growth with connecting to high-impact users. Additionally, with the world in a social limbo due to the pandemic, fantasy gaming like PUBG, COD Mobile and Free Fire have gained huge popularity and SHAREit has only made lives simpler for the gamers as it allows them to easily share these applications without internet requirements.

Apart from its gaming capabilities, SHAREit also leveraged its success as a content application to spread meaningful information throughout the spread of the pandemic by introducing a COVID-19 tracker and video section. The ongoing pandemic has only acted as a facilitator of SHAREit’s transformation from a file transfer application to a more rounded content provider. As per a report by Sensor Tower, SHAREit was included in the top 10 most downloaded applications on the play store for the first half of 2020.

Ironically, the ongoing pandemic has had a substantial impact on the overall gaming industry. Consumers are openly embracing the mobile gaming culture and while it may still be at a nascent stage, the mobile gaming industry is expected to harness its full potential sooner than ever. The next few years will be the defining years for the industry and the players who are a part of it.